Jennie Chancey and I have finally launched the Passionate Housewives Desperate for God Facebook page. It was created a while back and then promptly forgotten in the midst of the day to day challenges of homemaking and child rearing. As we have time, we will be sharing what God is teaching us, and we invite you to do the same! We love hearing from our readers and enjoy the interaction with other moms in the trenches.

Promote Your Page Too
Posted by Stacy McDonald at 9:51 AM

Interview with CBMW (The Council on Biblical Manhood and Womanhood)

The following is an interview with the co-authors of the book entitled Passionate Housewives Desperate for God: Fresh Vision for the Hopeful Homemaker. Gender Blog gave an overview HERE.

Gender Blog: What compelled you to write this book?

Jennie: Stacy and I were disturbed by a trend that appeared in the broader culture and also penetrated the church-the "me-first" movement that was applauded in publications as diverse as Christianity Today and Newsweek and World Report.

Wives and mothers were urged to put self first if they expected to be happy and stay sane. We were amazed that such an unbiblical idea had gained traction in print and online. I received emails from several concerned readers of LAF (ladiesagainstfeminism.com), who wanted to know if I'd write a biblical refutation of the self-first teachings.

Shortly after that, Stacy called me to tell me about a book she'd outlined that would hold out Christ's life as our model: dying to self, crucifying the flesh, and living for the Lord by putting others first and trusting the Lord to sustain us. When I saw her outline, my jaw dropped. She'd put down every single point I wanted to bring up in an article. That's when Stacy invited me to co-author the book with her, and I was thrilled to be a part of it.

Stacy: Jennie and I discussed her concerns over Christian women who were being duped into believing that the only way they were going to be happy and sane was if they pampered themselves, met their own needs and demanded their "right" to have it all. We were in agreement that women needed to be told the truth, straight up.

My original purpose and direction for the book related more simply to the erroneous picture of "homemaker" the general public was getting. Though our family doesn't even own a television, I heard about the types of shows that were becoming popular-shows where homemakers were portrayed as desperate, miserable, adulterous, and even murderous. Supposedly, they only "pretend" to be happy and content-and Hollywood is willing to show us what is "really" going on behind the scenes.

GB: Just how profound is the danger that feminism poses for our wives and daughters?

Jennie: Feminism is very dangerous. It hasn't changed since the Garden of Eden and still holds out the same lie: "What God says isn't good enough. You've got to make up your own mind." Feminism divorces girls from God-given, God-blessed femininity and urges them to pursue masculinity.

It's really ironic. I think "feminism" is the wrong word, because it's anything but feminine. Satan wants us to turn God's created order on its head. He doesn't agree with God's pronouncement that the creation of male and female was "very good" (Gen. 1:31). Egalitarians do their best to convince girls that male headship and biblical roles for women are part of a long-gone past and should be rejected.

But rejecting God's order does not bring greater happiness or fulfillment. I know, because I pursued the path of feminism for several years during college and for a couple of years after. I rejected the inerrancy of Scripture for a time, because "enlightened" professors at my Christian college told me "all that was written by men who were a product of their times." I am ashamed that I didn't take a firm stand against such heresy, but I didn't want to appear unintelligent or backwards, so I embraced it instead, forcibly silencing my doubts in the name of "higher education."

I Timothy 2:14 tells us that women are prone to deception. We might not be flattered by this, but it is the truth! We need to guard our hearts and the hearts of our daughters from the smooth tongues that would lure them away from the biblical role God has graciously given them.

Stacy: Whitewashed feminism is a more clandestine form of feminism that has crept into many modern churches. I'm sure you've heard the term "evangelical feminism." These feminists are typically not the radical, secular kind; they claim to hold Scripture in high regard, yet they do not accept the biblically defined role distinctions between men and women, and they reject male authority to varying degrees.

This more subtle version of feminism is particularly dangerous due to its beguiling cloak of Christianity. While its face may be more polished, and its manifestation less extreme, at its core, it is no different than its "secular" counterpart. It's simply whitewashed feminism.

This type of feminism can be especially dangerous to our daughters, but ironically, our daughters can actually be part of the attack on feminism. Our daughters love being women and understand their roles through God's design.

As we raise our daughters to embrace the feminine aspects of their creation and joyfully hold to a biblical view of womanhood, then we will see a whole generation of godly wives and mothers who are inoculated against the lies of feminism and who teach God's truth to their own children. They'll have seen the beauty and truth of the Scriptures lived out in real families and they'll want no part of the feminist lie.

Jennie: I think a lot is accomplished by simply affirming the biblical role for women from the pulpit instead of giving ground to the egalitarians by remaining silent for fear of offending. So many wives and mothers struggle because they lack godly teaching and affirmation of their role. Saying "thanks" on Mother's Day is nice, but preaching the Word and encouraging women to love and apply themselves to their callings is far more important. It's also important to demonstrate scripturally that homemaking isn't just for women with children.

Often women who aren't able to have children feel left out or like second-rate citizens in God's economy. The Titus 2 commands for women apply to all of us. Older women need to be reminded that their role doesn't end when children leave the nest. There are young women out there starving for godly mentors to come alongside them.

Young unmarried women need to be encouraged to invest in the lives of the families in the church through acts of service (helping in a home when a new baby arrives, taking meals to shut-ins, visiting widows, etc.). There are so many things for women of all ages and stations to do in the church.

When we neglect or forget those tasks, we leave a vacuum-one that has been filled badly by the welfare state. Time for churches to boldly and courageously set forth God's commands for women and bless them when they are obedient and faithful!

Stacy: One thing churches can do is stop making moms feel guilty for not being involved in every program the church offers. Don't ask mothers of young children to teach classes, organize events, or take on various jobs at church. Support them in their focus to care for the needs in their homes. Remember that many times they are already overwhelmed with what they are doing - they don't need additional burdens to juggle or distractions that will keep them from their more important tasks.

While there are certainly many ways women can and should serve the church during different seasons of life, a woman whose responsibility it is to care for her husband and children should not feel torn from her family or feel that she's doing "lesser work" when she's serving in the home.

GB: How important is it that we encourage our "passionate housewives" as they carry out their crucial but difficult task of homemaking?

Jennie: I think it goes without saying that there's not a lot of encouragement for women to be homemakers and submissive to their husbands today. So many women have written us to say that they felt alone in their beliefs and without support. It is truly critical that we encourage a revival of biblical roles for women (as well as men) and give all the support we can to those women who are faithfully serving the Lord.

The majority of feminists would have us believe that homemaking is brainless, meaningless work. It is anything but! It isn't just about laundry and dishes and changing diapers. It is about being the helpers to our husbands that God has called us to be. It is about extending hospitality, caring for the sick and needy, reaching out to the lost, and raising up the generation behind us to wholeheartedly follow the Lord. It's a full-time job

Stacy: We hear from women all the time who are thankful for the encouragement that Passionate Housewives, LAF, and Your Sacred Calling give them. Many are starving for like-minded fellowship, and can't find Titus 2 mentors in their own churches because so many older women are not available due to their own careers and personal pursuits.

We think it's very important to provide "passionate housewives" who are in the trenches with as much encouragement and support as we can. And we encourage husbands and older women to remember how important it is too. These mothers are training up future generations for God's glory - we should be very supportive indeed!

Posted by Stacy McDonald at 8:09 PM

Visit Stacy at Your Sacred Calling... 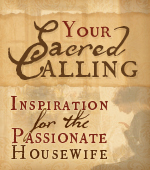 Promote Your Page Too

What Martha Peace has to say about Passionate Housewives:

"Passionate Housewives, Desperate for God is an exceptionally well written book. Jennie Chancey and Stacy McDonald do not pretend to be the perfect wives, mothers, and homemakers; but they do have a heart for God and His glory. Both of them see the role of the wife and mother as God’s high and holy calling and they exhort us through Scripture and practical examples to, by God’s grace, fulfill that calling. This book will make you think, will convict you, and will, as the subtitle states, give you a 'fresh vision for the Hopeful Homemaker.' I highly recommend this book." Martha Peace, Biblical Counselor and author of The Excellent Wife.